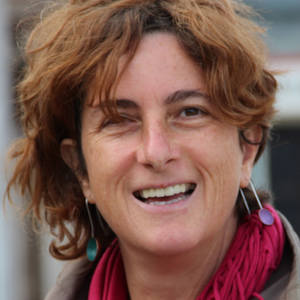 Emanuela Camacci, born in Rome, has loved to draw and compose objects with paper and recycled materials since she was a child. Already in elementary school she experimented with the art of ceramics, modeling clay and personally following the cooking of her first works.
He graduated from Art School in Rome, then enrolled at the Academy of Fine Arts in Rome in the Sculpture section. With the continuous desire to learn and experiment with new techniques, she also attended courses in engraving, woodcut and intaglio printing. After graduating, she finally follows a training in mosaic art at the laboratory of Costantino Buccolieri, where she worked for three years.
She has participated in numerous temporary exhibitions, such as Segni, a contemporary art exhibition in Turin in 2012, and in land art interventions in Italy and around the world, including, in 2019, GNAP Italy - Global Nomedic Art Project. Many international residencies, such as the Sculpture Symposium in Santiago, Chile in 2017 and the Yatoo International Artist in South Korea in 2018.
Among the privileged materials in giving shape to his ideas are stone, wood and clay, but he also loves to experiment with other media, such as iron and paper, in relation to the purpose and location of the works, up to the elements of nature.
In the sculptures made for outdoor environments, such as parks or gardens, emerges the ability to give essential and abstract forms to the stone, both as an organic element, and by crossing it with minimal geometric elements, through a careful and refined use of different surfaces and textures, which are changeable depending on the light; unique works, always different from each other in the tactile rendering.
In the recent series of works "Empty Cities" is significant the contrast between the geometric shapes finished with perfectly smooth surfaces, which symbolize the perfection and cultural persistence of ancient architecture, in contrast with shapeless elements made with rough and scratched textures, representing the organic and irrational part of the world, opposition that leaves a sense of unease, with a reference to metaphysical painting.
The artist in recent years is also dedicated to interventions and installations in nature, looking for and collecting plant elements and then compose them with a lyrical and poetic expressiveness, where emerges the love for the natural universe, a strong connection already present in the artist's childhood. Color thus enters into the creation and lights up with the greens of the vegetable components, but also with the colors of artistic tradition, such as the purples on the barks of trees and Titian red combined with the whites of shells.
All these creative elements gave rise to the series of works "Urban Nature" in 2020, with a language of great power. Here the technique moves from the experience of mosaicist, overcome by the artist with a fragmentation of the rock that creates splinters that seem to become organic, come alive and vibrate between light and shadow, building large compositions. They are positive images, of hope, as from the fragmentation of a static and lifeless world comes a "modern" nature that transmits strength and vitality.
Who has the opportunity to observe the works of Emanuela Camacci is transported into a universe where the harmony and balance of forms and surfaces tell the respect for the environment, living or inanimate, in relationship with man and his spaces.
An essential language in which the strength of sculpture knows how to conjugate the poetry of nature, where the links with poor art are mixed with elements of ancient culture and the emotional, cultural and cognitive experiences merge into a deep and passionate look at the world.