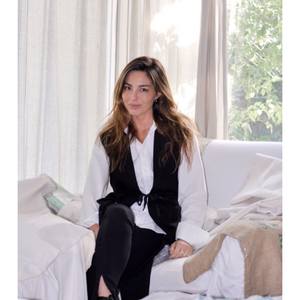 Marcela Ambrois, born in Montevideo, Uruguay on July 27th, 1988.
She spends her childhood and early adolescence living in the countryside in Mercedes, Soriano. Nature and animals become her main language.
At the age of twelve she returns to the capital to begin her secondary education. She attends her first lectures on charcoal and oil painting given by Professor Walter Nadal.
After graduating from the British Schools, she enrolls in the Catholic University of Uruguay to pursue a degree in Phycology, which she completes in 2016.
As she embarks on her artistic career, she begins to develop in the painting field. She is formed with renown Uruguayan artists Ignacio Iturria, Diego Píriz, amongst others.
She has the opportunity to experience a series of artistic retreats in the countryside in Colonia, Uruguay along with other students of Ignacio Iturria.
In 2016, she participates in a Colony for dedicated artists in Miami, USA, with a group formed by Iturria himself.
By virtue of her first studies of charcoal and oil in her adolescence, she begins to incorporate the expression of the landscape, which will later reappear in her later searches - as a main language and form of expression - also influenced and inspired by her grandmother “Chiqui” Cirión, who discovered her artistic vocation at an advanced age.
She will then name "Mystical nature" to her series of landscapes.

Today, she is dedicated to the development of various projects mediated by painting as the main sign, also including photography and experimenting with papers, cloths, woods and plants.
She seeks to transmit education helping older adults and adolescents in expressing themselves emotionally and artistically.
Her art works had been displayed in Pablo Atchugarry´s Foundation (2019), Misiones Gallery (2017-2018) and Ciudadela Gallery (2016), Uruguay.

Formed with Uruguayan artists Ignacio Iturria, Diego Píriz, amongst others.