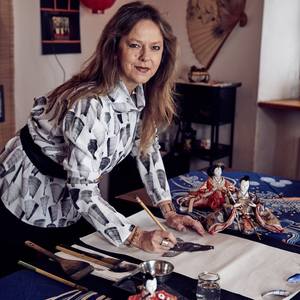 Thanks to my numerous trips to Japan, I discovered the art and philosophy of ink painting.

Since 2001 I have been studying the Sumi-e Art in Tokyo in the classes of well-known masters and since 2012 I have been perfectionning my skills in the class of Master Tohun Kobayashi until today.

In 2014 I received a diploma of Sumie Instuctor awarded by The Sumie Japan Association.

I run courses of Japanese painting in Zurich, in the Museum of Japanese Art and Technology 'Manggha" In Cracow, in Warsaw (Poland) and in Ekō-Haus in Düsseldorf, Germany.

I regularly exhibit my works at individual and group exhibitions in Europe, USA und Japan.

In September 2016 I became a member of the art group at the Noho M55 Gallery in New York.

In August 2017 I received the International Best Award in Japanese art, calligraphy and painting exhibition in Gunma Precfeture, Japan. Since this moment, I was awarded several times during the exhibitions n Japan.

In 2018 I became a member of the Jury of the international exhibition The Torch of Asia, at the National Art Center, Tokyo, Japan.

In January 2020 I have received a Special Award of the Japanese Ministry of Foreign Affairs for my 3 works and the promotion of the Japanese culture and ink painting outside Japan (International Exhibition Art for All, The National Art Center, Tokyo, Japan)
In my paintings I use very traditional techniques which have been always transmitted from master to master and many of them - on the highest level - never completely unified in a book . Taking care of these technical world's treasures remains very important to me. Combining this ancient style with modern approach while adding various, available tools allows me to achieve a unique style. My artistic research goes also into creating a new concept of sumi-e painting by introducing of the contemporary means of expression.