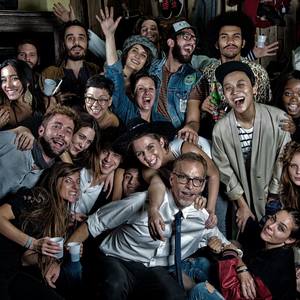 
"All my work is inspired by a need to provoke social and cultural dialogue. The medium changes dependent on the subject, context and message. I have usurped Renaissance paintings, thousands of meters of silk and antique Afghan doors. The results can range from photorealism to performances to installations to documentaries. The medium to me is only a vehicle and I often have to learn a new art technique in order to accomplish my vision."


He has recently begun an art research project, "Identikit", with art historian, Sophie Beer. This project will explore the validity of social artefacts and their interpreted context by means of participatory social art experiments.

Abouzeid is self trained in art and photography but has received sufficient expertise in both to be a Professor of Photography, SlowMedia and Photojournalism for numerous Universities in Italy and the U.S.

His work has been exhibited in important galleries and museums including Palazzo Vecchio (Firenze). He has received numerous awards and recognition including a Prize for Peace from the Region of Puglia for his project, “My Enemy My Brother” (2002), Sony Special One Shot Award (2016), special mention in the International Photo Awards and special recognition in the Italian PremioFotografica. His photos of Florence's historic artist communities and architecture are the basis for the book, "The History of Florence's Artisan District" by Gli Ori publishers.

In his Art based social initiatives, he applies the same empathic, storytelling to social provocations on MidEast Peace (My Enemy My Brother, 2007), Bedouin Tribes (Being Bedouin, 2009), Blues Musicians (A Year of Blues, 2010), Italian Integration & Racism (The New New World, 2012), Fashion and Performance Culture (Liquid Silk, 2013) and the North-South divide (AFRICA rising!).
SOLO EXHIBITS

January 2011 – “Being Bedouin”, Bedouin Aid Concert with the City of Florence; Florence, Italy