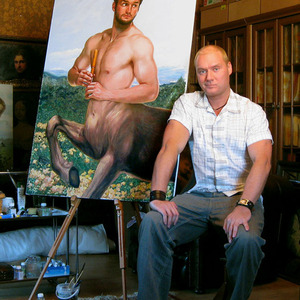 Born in Tallinn, Mart Sander was educated as a musician and started his professional career at the age of 18 as the member of the Estonian National Opera. Since then he has performed around Europe as solo singer, conductor or with his orchestra The Swing Swindlers. He is also a well known actor and TV personality, hosting such major shows as Dancing With The Stars in Estonia. He has directed and acted in several films and stage productions and has published three fiction novels. Mart Sander was presented to HRM Queen Elizabeth II on her official visit to Estonia and was commended by the Queen for championing British music, especially Gilbert and Sullivan, in Estonia. Sander is Roman Catholic and the knight of the order of St Stanislaus.

Mart Sander took up drawing and painting in his early childhood. During the last few years, he has become more dedicated to perfecting his skills as an artist.

He says: "I want my art to be so quixotic and alienated from reality, so rigidly conformist and traditional, that it eventually becomes as trendsetting and alternative as a straight marriage in an omnisexual world."