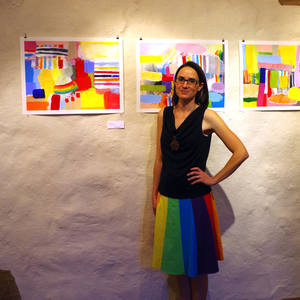 I am an abstract painter working in oil, acrylic, and watercolor. I switch between mediums frequently, and I often experiment with a variety of tools. Experimentation and chance have been catalysts toward new bodies of work. My artwork is represented by Unsettled Gallery in Las Cruces, New Mexico.

Generally, I have painted in an abstract aerial landscape style, and I tend to favor a bright palette with lots of contrast. My painting process is explorative. I rarely plan a painting. Rather, I begin by making gestural marks. Those skeletal marks influence the direction of the painting, giving the process a beginning. Form is brought to life with the use of color, and I will often give "objects" subtle shadows to convey a sense of depth in my non-objective pieces, hinting at what I like to call "personification of form." A square of color appears to float with a small shadow under it, nearly making it an actual thing, and giving it a personality of sorts. The process of painting involves making these forms relate to each other, becoming a whole painting in the end.