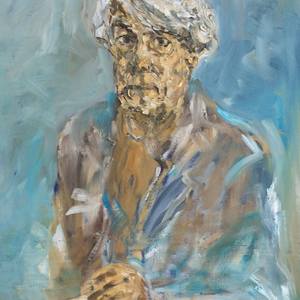 Norbert Mauritius was born in Stolberg (Germany) in 1950. He attended university from 1969-1978 and took degrees in Italian studies, German studies and philosophy at the University of Aix-la-Chapel (RWTH Aachen) in Germany, as well as in Siena and Perugia in Italy. He was lecturer at the Robert Schumann Academy of Music in Duesseldorf for many years and is dedicated to paintings since 1987. Norbert Mauritius lives and works in Duesseldorf (Germany) and in La Poissonnais (France).

About the work of Norbert Mauritius: "Mauritius paints his portraits as an intensiv and careful observer (...). He does not aim at a "realistic" reproduction, but communicates impressions and experiences which he extracts directly from observing and reflecting the person or from analysing the person's works, documents and biography." Dr. Brigitte Hammer, art historian

Norbert Mauritius has been displaying his pictures since 1991 in large-scale independent exhibitions in Germany (Berlin, Duesseldorf, Essen, Hamburg, Cologne and Munich). His special field of interest lies in portraits and landscapes. He has been working intensively on a cycle of composer portraits. As a result artistic cooperation often ensues with important music institutions leading to an exhibition of composer portraits in the Duesseldorf Concert Hall (Tonhalle) in 1994 and 1999, in the North German Radio and Television Broadcasting Corporation in Hamburg (NDR) in 1995, and in the Aalto Opera in Essen in 2000. The link to music resulted in a commission with the company "ARTE NOVA" (Bertelsmann). In 1997 he exhibited his portraits at the company "LOEWE" at the international radio and television exhibition (IFA) in Berlin in 1997. In 1999 he exhibited new portraits and landscapes in the Art Museum at Penzberg in Munich. The composer portraits were exhibited one more time in Houston, Texas, USA, in 2001. In the same year Norbert's work was displayed in Milan, Italy. In 2002 the president of the state - government of North Rhine-Westphalia, Germany, arranged an exhibition. In 2003 Norbert's cycle "Faces in Resistance" was exbibited at the police headquarters in Duesseldorf. Norbert Mauritius' cycle "Portraits of Painters" which he finished in 2004 was displayed amongst others at the company "ThyssenKrupp Nirosta GmbH" in Krefeld (Germany) in 2004 and at the company "SIEMENS AG" in Mannheim (Germany) in 2005. In 2006 this cycle was exhibited several more times in Germany.