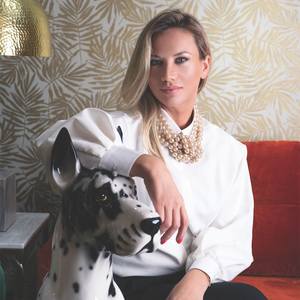 I was born in 1979 in Tbilisi, Georgia. Since I was a little, I've always had a passion for art, specifically painting and music. I was often arranging concerts in my elementary school. I went to a musical gymnasium for 11 years. While being there I performed at several concerts with a symphonic orchestra and participated in international music contests held in Tbilisi. I became a laureate of the national contest of Georgia (1996) and took part in an international contest in Hannover, Germany (1997). On the other hand I had passion for painting from an early age. I had my first exhibition when I was in kindergarten.
After graduating from the gymnasium I realised that my true vocation was painting and I decided to go to the Tbilisi State Academy of Arts, from which I graduated in 2003. I attended short courses in Art and interior design at Central Saint Martin college in London, (UAL:) have participated in many group exhibitions in Georgia, had several personal exhibitions in Tbilisi and Tallinn (Estonia). I took part in International Art Festival held in Mtskheta (Georgia). My works have been held in private collections in Georgia, New York, Monaco and in Estonia. I run my boutique of furniture and interior accessories and have my own interior design studio where I work with other designers on various projects. From all the projects I’ve worked on I’d like to underline my participation in decorating the interior of “The Buddha-Bar Tbilisi” including installing the wall sconces, locating chandeliers and painting dragons on canvas, which represent the signature of the brand. The restaurant has already become one of the landmarks of the capital.

Group exhibition in the Sate Academy of Arts 2002