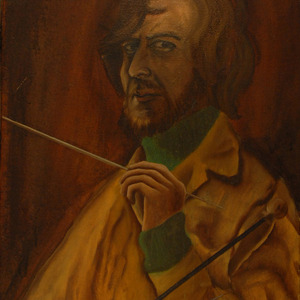 British artist, photographer, writer, and poet born in the UK. I paint mostly in a surrealist style, dreamscapes, nudes, still lifes, in both oil and watercolour. I have travelled to many countries including Austria, Canada, Germany, Ireland, Italy, Netherlands, Romania, Scotland, Slovenia, USA, Wales. I have had studios in Barcelona, Spain, Caithness, Scotland, near Florence in Italy and in London, UK. I generally paint in the Spring and Summer months, and write during Autumn and Winter. My inspiration has been driven by my early upbringing in the wilds of the northern Highlands of Scotland, the cosmopolitan atmosphere of central London and later by sojourns in the Balkans and the Mediterranean region.

My all-time favourite artist is Leonardo da Vinci, whose works I admire enormously. I have been strongly influenced by the works of Salvador Dali, Rene Magritte and a number of the other Surrealist painters, but I am also a great fan of the works of Matthias Grunewald, Albrecht Durer, Vincent van Gogh, and Henri de Toulouse-Lautrec.

I attended Wandsworth Grammar School in London and Camberwell School of Arts and Crafts (now University of the Arts London) where I studied painting and life drawing under the able tutelage of the late Patrick Symons and Sargy Mann.