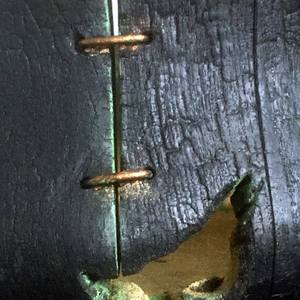 
Mike's career path has taken many twists and turns all of which very different form his now chosen profession. He began boxing from the age of 8 making it to amateur level by his teens. Encouraged by his Father he continued for many years until he swapped his gloves for a ball. He played semi - professional rugby as well as working full time as a builder.

Although Mike always practised his art of sculpting he worked in solitary and without promotion for a number of years. It wasn't until his mid 40's he gave up work, completed his BA Hons at Bristol University and decided sculpting, his life long passion, was to take precedents. Utilizing materials taken from the building trade, such as concrete, bitumen, tarmac, render, plaster, paint, clay and stone he creates the most amazing sculptures. Through colour and texture, he explores scientific and philosophical interpretations in an abstract form.