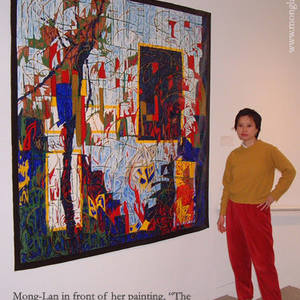 While still in high school, I received scholarships for three years to attend the Glassell School of Art (the Museum of Fine Arts Houston ) from 1984-1988. Subsequently, my paintings and photographs have been exhibited for one year at the Capitol House in Washington D.C., for six months at the Dallas Museum of Art, the Museum of Fine Arts in Houston, in galleries in the San Francisco Bay Area, in public exhibitions in Bali, Bangkok, Buenos Aires, Seoul and Tokyo. In conjunction with the National Endowment for the Arts, I was the Dallas Museum of Fine Arts' inaugural Visual Artist and Poet in Residence during the month of February 2005.  An exhibition of my paintings and photographs, "The World of Mong-Lan," ran from January 30-August 28, 2005.  I also gave poetry readings, gallery talks and conducted workshops on art (drawing and painting) and writing / poetry at the Dallas Museum of Arts for the general public, at the Dallas Public Library, and creatively talented middle school and high school students in Dallas area arts magnet schools. I have taught at the Univ of Maryland in Tokyo, Univ of Arizona, Stanford Univ, and have been an invited writer-artist on numerous campuses. I now divide my time between Buenos Aires and the United States.