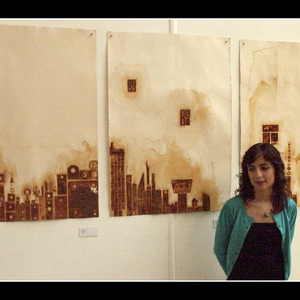 In my work I have been looking at the tension between modern life and the natural world, with a particular focus on waste disposal and recycling. I am an avid advocate for re-using and transforming discarded objects, extending their life, and giving them a new meaning.

The medium of printmaking enables me to explore the textures and shapes of found objects and transfer them directly into paper. Using rust to represent the process of decay, each piece evolves through disintegration, acting as an antidote to the materialism of modern industrial life.

The development of my pieces is intuitive, a continuous process of exploration where the natural process of rusting is accelerated and embedded onto the paper.

Currently exploring the possibilities for living organisms using different substrates with a focus on recycling materials from our day to day. Mushrooms are natural decomposers, and are proving to be quite versatile. In exploring the properties of living mycelium I hope to research and develop ideas with a clear focus on social and environmental issues.

My work is now in private collections in Portugal, The Netherlands, Germany and Brazil.

31 mag: article about my work at the Home of Art Gallery in Amsterdam. http://www.31mag.nl/home-of-art-ovvero-rust-printings-in-stile-amsterdam

January 2011: Selected by Prensador editions to collaborate in “A prensar, é que a gente se entende…” Collection launched in April 2011