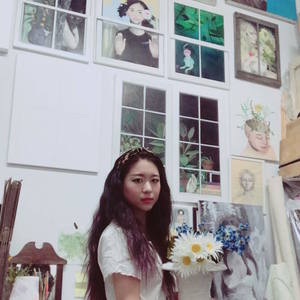 Natsumi Goldfish is a Japanese visual artist and a painter born and raised in the suburban area of Tokyo, Japan. It was a place of between, where nature and urban culture and many different elements coexisted at that time. The environment had inspired her to believe in pluralism, or something close to the idea of being between and both. In 2013, Natsumi Goldfish received her BA in Art degree from Tyler School of Art, Temple University, Philadelphia, PA. Natsumi has been fundamentally interested in human being: human nature: what defines human as human: conscious and unconscious human behaviors seen in the history, in people who relate to her in various ways, as well as in herself in her everyday life. Natsumi’s works are created around ideas and questions she encountered while seeking answer to the question "what is human being", and the differences between human and other creatures. In 2017, Natsumi Goldfish had a solo exhibition in Koganei, Tokyo, and in 2018 two small solo exhibitions in New York City, and has been also selected in multiple group exhibitions in Tokyo, Philadelphia, and New York City. In 2010 she received the New Artist of The Year Awards, from Temple University Japan Campus. In 2018, her painting was featured in Alex Inc. (START UP), Pilot Painting, ABC TV Series. Today, Natsumi Goldfish lives and works in New York City.
For a commission, and for any other inquiries, Please contact her at info@natsumigoldfish.com