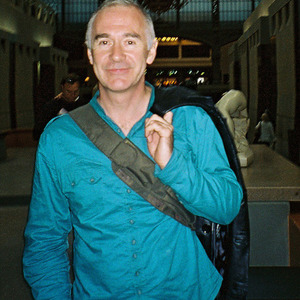 My work uses various media depending on the concept, but tends to often involve some elements of film/video and photography.

If there is a theme that runs through my work, it may be said to be a preoccupation with what it means to exist in the 'moment' - that contradictory state that is often implied and yet very rarely experienced.

I was an early adopter of open reel b/w video production in the mid 70s, with occasional residencies at broadcast TV stations and educational departments, notably 18months at Brighton Poly as the Arts Councils' Video Artist in residence.

My last installation was a multi-video piece called 'Send Three and Fourpence...' premiered at Hartlepool Galley summer 2013 - based around emanations from the former Queen's Rink ballroom in that town. Prints from that show are available here. There exists also a limited edition pressed vinyl of the big band recording I wrote and recorded for that show.
Also shown Toffee Factory, Newcastle upon Tyne November 2013.

A previous installation piece for 'The Specials Lab' was featured in the NOV 2008 edition of AN magazine - prints available here.