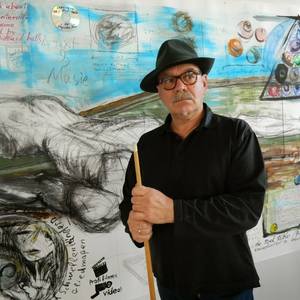 Odysseus Krum was born in 1951 in Bulgaria. He received a BFA in Architecture and a Masters of Fine Art from the Art Academy in Sofia, Bulgaria where he studied Painting and Graphic Design.

By the end of the 70s Odysseus Krum is already a well-known artist in Bulgaria, where he receives numerous national and international awards. Troubled by the communist regime and a human rights activist, he flees Bulgaria in the mid 80s with his wife and young daughter to Germany.

After some initial financial despair he begins working with the German and European Interior Design Industry where he applies his skills in fine art to design and achieves soon thereafter unexpected and rapid success. During the 90's he reaches professional acclaim as a Top Designer in the European Interior Industry.

During those years he develops his own art in addition and creates a new style of painting which he calls "Of Art" (A textile design gets industrially printed in yards, stretched and used as a canvas and painted over to form a new form of art). His art is exhibited in Germany, Belgium, Austria, France, Italy, Switzerland and The Netherlands.

September 11th, 2001 is the day that breaks his private and professional life down. He can't paint or draw during the span of 6 years until he recovers from his shock in 2007/2008.

Once again, with newfound enthusiasm he enters the art world. After a couple of very productive years and a body of work of several hundred paintings he defines his new fine art direction, which he calls "Popimpress Biography".
His paintings are executed with classic techniques often supported by his own developed effects. In the foreground are his thinking and his social engagement. His paintings express, like a collage, mismatching scenes and contradictory feelings. Details are indirectly linked and demand provocative thinking.
In addition to his paintings Odysseus Krum conceives freestanding installations and searches for uncomfortable paths to realize them.
His identity develops and undeniably takes place in his art.

Odysseus Krum does not define his own artistic work in terms of any current in art. Going through different transformations, he creates art for art’s sake excluding all fashion or temporary effects. Identifying himself as closer to postmodernism, he creates works of deep, often ambiguous, meaning.
Odysseus Krum calls his new creative process “creation of projects”: each project is a conglomerate of texts, paintings, graphic drawings, plastic art objects and architectural installations. The whole structure is often completed by video or music.
His latest project, ‘Of men, balls and the billiard table of life’, is part of this process. The artist has created a vast ‘package’ of paintings, drawings and graphics, and designs plastic three-dimensional objects which are part of a self-supported spatial installation.
This project is an expression of Odysseus’ vision, thoughts and emotions that influence his choice of subject.
The written description of a subject is a substantial part, a kind of libretto, of a project. The artist believes that only a complete synergy between literature, painting, music and new media can be essential for the creation of a global project.
In fact, different elements of art brought together, exposed in one place, on a common thematic platform, and sharing an idea, form the space in which he has been working hard over the last few years.

The human being and the isolation of the individual within the modern society are the main, almost invariable subject of his work.

Odysseus Krum is looking ahead to many artistic presentations in Germany, the Netherlands, California, the USA and other countries.