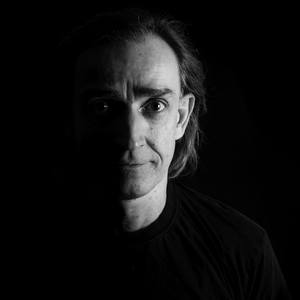 Internationally award winning, Olivier Lamboray (1968) is a Belgian Surrealist painter who currently lives in Indonesia with his daughter. He has been painting since 1992 and has, to date, had many successful exhibitions in Belgium, Italy, Thailand, Netherlands, Indonesia, England, USA, Guinea and France.
"Painting is my Life"... Would really define who he is.

Surrealism is very present in Belgian culture and he has been fascinated by it since his early years... "The magical feeling of the surreal dream..."

Often compared to famous Belgian Luminaries such as Rene Magritte or Paul Delvaux, he has developed a very personal style, classical but surprising and inviting.The deep blue of his skies is a trademark really recognizable

After many years traveling around the world and embracing different cultures, colors, mind sets, he settled on an almost deserted island in the Andaman sea for 6 years.
6 years facing the horizon, facing himself, the infinite.. The reflection of the self and the deep search of personal understanding of a life journey.
... And like the Paulo Coelho's Alchemist, it takes around the globe to realize that what we are looking for, is inside us.

The steps on that path were difficult ... A dangerous trip where it is easy to get lost in the darkness of the loneliness, teasing craziness
In the deep places of the mind....
It was like walking on a wire at the edge of the world.

Painting is what kept me alive, the dream, the faith, the wonder.

"Every painting leads me closer to who I really am".
With time, while keeping his very personal Belgian touch, his paintings reflect more universal subjects, such as the value of time, its impermanence, our place in the universe, the outer space, its wonders and secrets

Represented on US Territory by Mahlstedt Gallery (New-York)