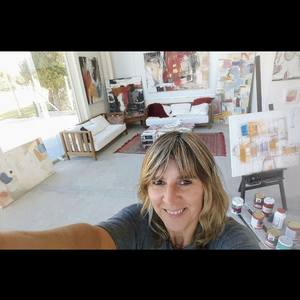 I have known Olga Armand Ugon for a few years. I've seen her painting. Actually, I have seen her enjoy painting; I have seen her suffer while painting; in short, I have verified her creativity in action and I am happy to say that she belongs to that group of people who think, reflect and express themselves by doing.
She saw then, the need for expansion as one of the characteristics of her work. Medium and large surfaces always suited her work better than small ones. In the latter, she would feel constricted, suffocated.

Her painting should give way to his ample gesture, although, as she controls proportions very well, she also allows space on her paintings for small pictures and stains.
This amplitude could be applied, in another sense, to her chromatic subject, which goes from liquid to dense and lumpy.

The restless spirit of Olga Armand Ugon cannot be comfortable imposing limits, thus, the painting surface is a witness of the struggle to organize these expansive and free impulses.

We could say that her personality needs to be reflected still in how she works with the coloring, since she has to move also between the random (blasting, broad strokes) and position, size, color, of them in the basic plane, because that control would integrate them into a structure, that of the image. It goes without saying that her concept of structure accepts relatively randomness as one of its components.

As in her personality, forms and matter struggle between a liberating impulse and a sense of order.
The collage, linked to the pictorial subject and the linear drawing of the drawing was the appropriate vehicle for her rich expressive display.

Despite what has been said, her spontaneity accepts stratifications. Each layer can have distribution of shapes, colors and signs different than the one that follows it. However, it is either translucent (veiling) or partially covers the preceding layer, generating in that appearance new forms, new graphics or signs.

It would be appropriate then, when we refer to the works that apply that procedure, to speak of real palimpsests.

The whole of her work uses a sensitive geometry, both in the limits of its forms as well as in the surfaces they limit.
In any case, this geometry appears in the organization of forms in the basic plane. There. always with freedom, she manages notions of rhythm and proportion.

Many of her works use white glazes, which give them a neat transparency.
In these palimpsests, not just various layers coexist, but also various attitudes. There are cases in which the gesture with which a graphic is performed full of freedom and spontaneity coexists with a will that organizes the surface in terms of color, texture and shape.

Like drawings and graffiti on posters printed and pasted to walls that we observe in our cities, the surface of her work attests to successive operations, giving the final result an apparently random character.

Her images range from the non-figurative to the use of figurative signs on a chromatic structure of different planes.

Some paintings and drawings feature graphics that derive from direct observation of reality. But it is in collage where Olga Armand Ugon unfolds her greatest virtues and especially in those coexisting with the use of strokes and schematic signs not derived from mimesis.

I did not witness the execution of all works from which I write these few thoughts.
I confess my joy to know them. For their quality and for being testimonies of the health of which Painting still enjoys.
Cleaver Lara