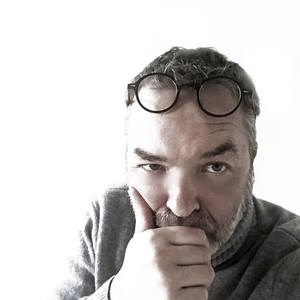 Olli Wolf Boehm is engaged in the cultural sector since the 1970 years. He work as an artist, as a photographer, graphic artist, art director, creative director, director and as a creative consultant.
His work is awarded national and international.
(The art award of Cologne, ITVA, Red dot, Canes Lion,
Golden Drum, New York festival) After the young and wild years as an artist (awarded with the Cologne Art Award) he became a photographer in Paris and Frankfurt/Main and soon, through his talent, a job as a graphic designer in an advertising agency.
Followed by stations in smaller and bigger advertising agencies as junior art director, art director and creative director. Among others at meiré und meiré. Before Olli decided to became a director he worked as an executive creative director and creative consultant aswell for the Trend Forum and as a guest lecturer for the Hamburger Akademie fur Art Direction. Since the Millennium he work as a director and combined all his other professions. Out came a lot of concepts, campaigns, commercials and films.
Sinces 2011 he is working as an independent coach for personal andbusiness matters which dosn‘t make a differance from his POV. Even he has a lot of commercial professions Olli comes back to his art and is trying new and different visual ways. His MS disease brings him more and stronger back to art and philosophy.