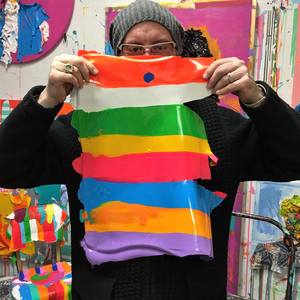 
My work is seeded in process painting and material discovery. Elements of sculpture, textural curiosities and color/form relationships combine to create a unique dimensional aesthetic in each work. There are also elements of nature and/or humanity in my work that, depending on what may be happening at the time, mix about with the abstract elements to create a sort of historic bibliophile in the paint. These “living” paintings represent the NEW BEAUTY as our complex evolution integrates with technology. They offer a strong personal understanding of where we are as a people today...complicated, curious, ever changing. They are predatory, hedonistic and redefine subject and medium.

The Heat is On, Detroit Artists Market, July 2018

Patrimonio, The Legacy of Italian Art in Michigan, 1996 Sponsored by the government of Italy and Wayne State University, Detroit, MI