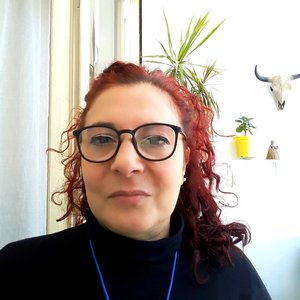 My current paintings are inspired by nature, during walks through parks I like to observe the barks, especially of plane trees, in some I already see the right image for the painting (whether they are human profiles or abstractions) the shapes are ready to be used, in others I have to work hard until I get the result that interests me. I also find ideas from old clothes, I start by snap shoot their shapes, the animals spots want to get back the primitive and ancestral relationship with our origins,like graffiti on prehistoric cave walls to underline the deep union between man and nature.


From 2000 to 2016 my paintings have revealed subjects who we want to leave in the shade, I'm be able to see and show them as art works, they become positives and engaging, come alive with colors.
These structures and these objects become mysterious subjects, rather than simple social scrap.
I find interestingly make to know that many artworks show places that today exist no more, they are structures that in this period of time has been knocked down or permanently closed.

Paola was born in 1972. I live and work in Turin.
Graduated at the Primo Liceo Artistico and attended the sculpture course at the Accademia of Belle Arti.
She has started the artistical trip that approached her to the painting and finding in the acrylic, her current art expression.

SATURARTE 2020
curated by Mario Napoli.
From Saturday 12 December/23 December, the collective to celebrate the centre's 25 years will open at Palazzo Stella, Genova.

IN A PINK ROOM COLLECTION

"ESPRESSIONI ITALIANE"
during "Italia in Piazza 2009" events at Atene, organized by the Italian Embassy in Athens.
Tecnopolis space, curated by Afroditi Oikonomidou.