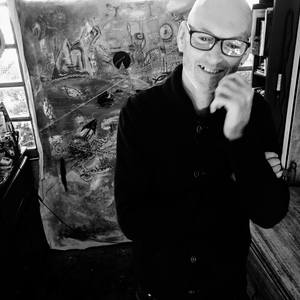 Irish-born artist Pearse Gilmore has been creating seminal works across Europe for over 35 years. Insisting on chance and accident to access a realm beyond the seen into a subliminal searching without looking to not break the serendipity of the moment of action as the medium creates by the movement of hand another new world to gaze on, focused on the process of painting itself, his work has been compared to Albert Oehlen and Gerhard Richter though Gilmore cites neither as inspiration for his approach ...........%%%%%%%%%%%........


all is claimed all is marked my private property. nowhere can we roam freely we have looked into every corner left our shit and stole the riches destroying all, such never-ending destruction this is so sad, heartbreaking, and the retort, why don’t you do something about it if it bugs you so much, there’s no point thinking about it unless you do something… but how can you stop an overrun infestation by your own out of control species, about to self destruct, each one of us is the problem, each one of us is responsible for this rape of this planet by dint of our very human existence.. we destroy, we are destroyers, it’s our basic nature, we take and want more and take more and want more and on and on, ad infinitum.....Pearse


-------------------------------------------------------------------Pearse Gilmore was born in Dublin in 1966, he studied art in Limerick and went on to have a successful career as a recording engineer music producer. Ran the independent record label Xeric and Murgatroid, Managing for a time the Limerick Group The Cranberries. He left Ireland in 1998, the ever-wandering artist, watching, living, and creating. He has shown a number of times in Ireland, Barcelona, Budapest, and London. living in London, Barcelona (9 years), Budapest, Los Angelus, and for the last 8 years in the south of France. In July 2019 he moved to a new studio near Girona Catalunya Spain. In early 2020 he purchased a rambling village house in the heart of France 2 hours from Paris where his new permanent Studio Gallery is now based.