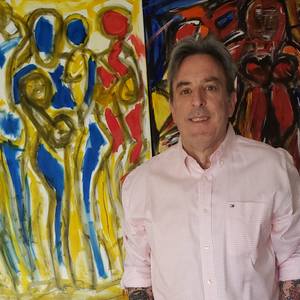 Peter Vigil is a Miami-based, self-taught artist that began painting in 2006. Since then, his work has been exhibited at museums, galleries, festivals, and various other venues in the United States and abroad. Vigil’s art is influenced by such artists as Pablo Picasso, Willem de Kooning, Arshile Gorky, and the early works of Jackson Pollock.

Vigil was born in Cuba in 1967 and has lived in the Miami, Florida area since 1973 after living in Madrid, Spain for four years.

My paintings depict social and cultural themes that are at odds with the conventional societal mores. These include, but are not limited to, power, structure, excesses, sexuality and relationships.

I use bold and vibrant colors, specifically hues of red, to provide subject(s) of my paintings a physical sense of existence and to underscore the significance of emotional experiences. I also use thick black lines as an overlay to conceptualize the conflicting and often subdued perspectives held by individuals. The paintings are mostly created using acrylic paint or acrylic paint and soft pastels on canvas using an abstract, abstract expressionist, gestural style or a combination thereof to allow the viewer to determine the underlying concept or significant element that embodies the painting. I rarely use sketches and, therefore, prefer to allow the creative process to direct the creation of the work.

I took a sabbatical from exhibitions and art fairs from 2015 through the present to focus on other methods to promote my art and to develop new ideas to create works.