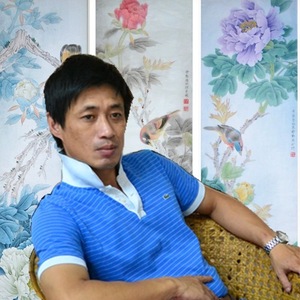 I am a professional Chinese gongbi painter specializing in Gongbi flower and birds painting, especially in painting peony and lotus flower. This style of art was accomplished in secret in royal palaces and private homes back to ancient China. Only the wealthy could afford such artists.

The gongbi style had its beginnings approximately 2000 years ago during the Han Dynasty (206 BC - 220 AD) when Han's political stability and its prosperity favored the advancement of the arts. These paintings peaked out between the Tang and Song Dynasties (7th to 13th centuries) when these refined paintings were endorsed and collected by the royal families of China. The gongbi artists to perfect this style must totally commit themselves to these techniques. Only the wealthy could afford such artists. This style of art was accomplished in secret in royal palaces and private homes.

Peony
The peony is among the longest-used flowers in Eastern culture and is one of the smallest living creature national emblems in China. Along with the plum blossom, it is a traditional floral symbol of China, where the peony is called ç‰¡ä¸¹ (mÇ”dÄn). It is also known as å¯Œè´µèŠ± (fÃ¹guÃ¬huÄ) "flower of riches and honor" or èŠ±çŽ‹ (huawang) "king of the flowers", and is used symbolically in Chinese art. In 1903, the Qing Dynasty declared the peony as the national flower.

Lotus Flower
From ancient times the lotus has been a divine symbol in Asian traditions representing the virtues of sexual purity and non-attachment.
In Chinese culture Confucian scholar Zhou Dunyi wrote: I love the lotus because while growing from mud, it is unstained.
In Buddhist symbolism, the lotus represents purity of the body, speech, and mind as if floating above the muddy waters of attachment and desire.

I have more than 100 original paintings including different series - Peony, Lotus Flowers, Birds, Archaized antique/ancient Chinese gongbi painting, and etc. I will upload them one by one.

To name a few most recent exhibitions at national level

Below is some awards and achievement I received

And many other exhibitions before 2011