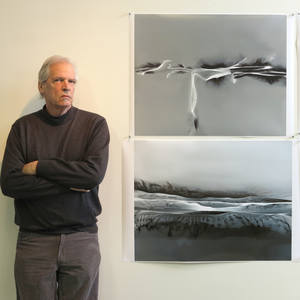 Daniel Ranalli grew up in coastal Connecticut. He has been working as a visual artist for over 45 years. His work is in the permanent collections of over thirty museums here and abroad including the Museum of Modern Art (NY), Museum of Fine Arts Boston, San Francisco Museum of Modern Art, Nelson-Atkins Museum and National Gallery of American Art (Smithsonian). He has been included in over 150 solo and group shows in the U.S. and abroad. Daniel has also been the recipient of two fellowships from the National Endowment for the Arts and multiple fellowships from the Massachusetts Cultural Council.
Although largely situated within the medium of photography, Ranalli’s work can often be characterized as conceptual and/or environmental. The work is frequently rooted in the balance between control and chance – such as the unforeseen results in the photogram, the found scrawls on a classroom chalkboard or the path of a snail in wet sand.
In 1993 Daniel Ranalli founded the Graduate Program in Arts Administration at Boston University where he taught until 2015. At which time it was one of the largest arts administration programs in the U.S. and typically enrolled 80-90 students in both the visual and performing arts tracks. WIth a significant international presence, Daniel brought BU students to Barcelona and Cuba to better understand international approaches to managing arts organizations.