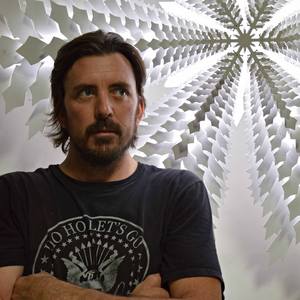 An artist at heart, Cole McLaughlin is a metal master who started his metal art/design company Revello Metal Craft as a way to cater to peoples artistic needs.
He’s worked with some of the best --
- Architectural Firms
- Restaurant & Hospitality Design Firms
- Retail Store Design Teams
- Interior Designers (commercial & home)
As well as other creative individuals, to specifically develop for them either a unique one-off metal art piece or mass produced pieces to fit their plan.
He’s worked with top Architecture and Interior Design firms in L.A, O.C., and San Diego, creating metal work including signs, sliding metal doors, desks to full office work spaces and beyond, for corporations large and small. He’s also built many custom pieces including vanities, mirrors, stainless counters, stairs and much more for residential homes.

Cole recently designed and created a signature metal snowflake series that started with over 50 unique pieces. All pieces are hand made with special finishes. Witch are being displayed in art exhibits around Los Angles.

His metal work can be seen in many well-known high-end Hotels, Bars and Restaurants in L.A., O.C. and Mammoth Lakes.
His unique pieces are also sold in retail art and furnishing stores in Los Angeles, Palm Springs and San Clemente.
His metal art and furnishings have also been featured in magazines, websites and television.

RECLAIMED METAL -
Approximately 70% of his art pieces are made of reclaimed remnant metal -- recycled metal that becomes high quality materials, which go into creating very unique, one of a kind art.

Revello Metal owner and artist, Cole McLaughlin, has introduced his signature line of amazing metal snowflake art to the masses through his art show exhibitions in various cities.

Each handmade metal snowflake is one of a kind, spectacular, dramatic and unique in design. Made of remnant steel, stainless steel, copper and brass.

Each piece is also majestic in size, ranging from 2 feet to 7 feet in diameter.

Cole McLaughlin was among the handful of artists selected by Bombay Sapphire Gin Artisan Series to showcase his ORB LIGHT metal sculpture at the 2016 reception at Bergamot Station in Santa Monica, Building Bridges Art Gallery. The packed venue's main speaker was icon/mogul Russell Simmons who also had a hand in selecting the artists.

This years theme was Masquerade held at Canyon Lodge at Mammoth Mountain.

Two Snowflake art pieces were auctioned off on behalf of professional snowboarder and gold medalist, Kelly Clark, and her foundation, The Kelly Clark Foundation.

December 2014 marked yet another amazing holiday metal snowflake art exhibit from artist Cole McLaughlin. Over 30 stunning pieces were on display for the hundreds who popped in to see these magnificent metal snowflakes displayed. The venue nestled across from the famous Newport Beach Holiday Boat Parade catered to an eclectic crowd of Cole's fans and friends.

Artist Cole McLaughlin was asked to display some of his metal snowflake pieces in the showroom of renowned jewelry artist Kate Mesta, at the world famous Las Vegas World Trade Market in January 2014. Mesta is known for her creative pieces in the celebrity community, most notably for Dancing With the Stars.

Mammoth Lakes, Calif. (October 22, 2013) ? On Saturday, November 9, 2013, not all the snowflakes at Mammoth will have fallen from the sky?some will dangle from the walls of The Westin Monache Resort, Mammoth when the resort hosts an art exhibit and reception showcasing the snowflake artwork of Cole McLaughlin.

On Saturday December 1st 2012, approximately 240+ guests were in attendance from 7pm to midnight at Echoes Under Sunset in Los Angeles CA, to view this massive art exhibition which featured many unique and amazing metal snowflakes ranging from 2 to 6 feet in height and some weighing over 100 lbs.

Some of the invited guests and celebrities in attendance were actor Drake Bell, Fox tv personality Brent Ringenbach, singer/songwriter Julia Holter and Tris Imboden, drummer for the band Chicago.