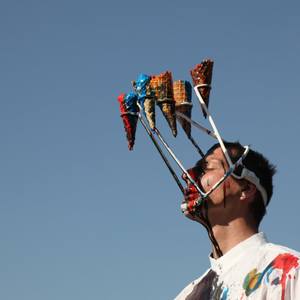 Riccardo Matlakas (b.1992, Naples, Italy) is a London based multidisciplinary artist working internationally. He is best known for his multi-talented capacity in different art forms including performance, dance, painting and sculpture.
He obtained a degree in Sculpture at the University of Fine Arts in Naples and an MA in Social Sculpture at Oxford Brookes University.
Riccardo values the context he works in as the main inspiration for his work, finding a common ground with each culture he connects with. He creates cathartic actions and performances in the fore-front of current political, environmental and spiritual concerns by digging for the essence of humanity beyond race and custom. The artist often collects relics from his performances which later become objects of memory and contemplation. Riccardo Matlakas has performed and shown his work extensively in Europe, Russia, Ukraine, Turkey, Palestine, Jordan, South Africa, Iran, Armenia, Russia, Myanmar, Mauritius and South Korea.

RICCARDO MATLAKASQUALIFICATIONS AND EDUCATION
2012/2014 MA in Social Sculpture and Contemporary Art at Oxford Brooks University, Uk.
2007: UAL (University of the Arts of London) Diploma in Facilitating Learning in Arts for the communities.
2006 Degree in Sculpture and Design at University of FineArt, Naples, Italy