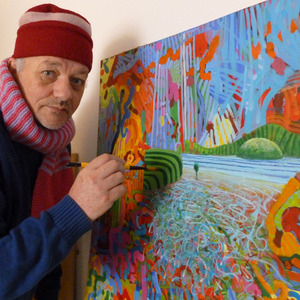 Nicholas Usherwood, Art Critic, writes of Richard :
"Performance painting, poetry slam champion, interactive art with young children - such activities are not the normal profile of a committed and intensely serious-minded and hugely prolific artist but then Richard Heley's whole creative career has not followed any remotely conventional pattern. Born in Bedfordshire in 1950, he emigrated, aged 15, with his whole family, to Australia. It was a liberating decade spent there during which he quickly and, for the first time, became aware of the strength of his creative instincts and though he would have loved to go on to art school, family economics dictated a teacher training course at the Melbourne College of Education. In the strongly egalitarian society that Australia then was, this was no advantage however, such institutions being powerhouses for social and cultural change and Richard Heley found himself among some remarkably gifted and passionate teachers, most particularly in the sculpture class. Though this was not to prove his particular artistic direction, one senses, from the way he talks about this period of his life, that it was the attitude of this particular teacher, which has stayed with him ever since. But, not long after finishing there, a nostalgia for home and the fate of his village football team (of which he and an 80 year old man had been virtually the sole supporters!) drew him back to England where, painting and performing furiously, he has been based ever since. As might be expected from all of this, the painting that has emerged, particularly over the last ten years or so as he has slowly started to focus on his own rather than his more collaborative artistic activities, reflects this extreme unconventionality. Frequent return visits to Australia, travels through the islands of Indonesia alongside the liberating impact of working closely with children and writing and performing poetry, has resulted in work teeming with rich and exuberant imagery, bold, painterly touches and brilliant colour - Gauguin meets Chagall meets Sidney Nolan - with English restraint and reticence nowhere to be seen, thank goodness! Thus in one of the larger canvases 'Welcome to Circus Earth', a quite astonishing gallery of images focusing around a tightrope artist walking in front of an advertising hoarding includes a huge, leering, day-glo green chameleon, a purple translucent fish acrobat, a wriggling baby suspended by his nappies from the high wire artist's rope and still being painted as we speak, a figure about to be shot from a cannon! The same generosity of imagination is no less apparent in the smaller acrylics on paper either, trees and plants transforming into female faces and figures, islands in shimmering in blue Pacific seas forming sparkling abstract compositions and, again, taking on human forms. Richard Heley talks a lot about the need he feels to be able to "let go" in the making of such work, and it is his success in doing just that, which enables us, as spectators, to enter his imaginative world with such freedom and exhilaration."

Born in Bedfordshire but grew up and graduated in Australia.