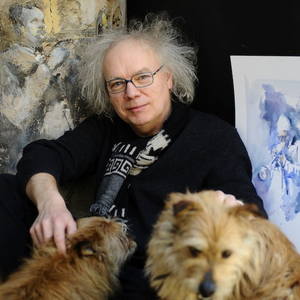 R. Andreoli was born in Mirandola in the province of Modena in March 1955.
Since he was a child he cultivates the art of painting followed by his father Alberto, painter for pleasure, who, through the technique of oil painting, instills the first rudiments on the use of color, the perspective but, above all, makes him a part of the charm of free and spontaneous artistic expression through the analysis of contemporary painting.
Andreoli's interest in painting is not separated from his passion for music, for which he will deepen his knowledge by attending the Bologna Conservatory and then moving to Piedmont where he will finish his studies in Turin.
From '78 to today he has made several personal exhibitions, participated in numerous collective exhibitions and held several courses and workshops in various Italian cities. Many of his paintings are present in public and private collections throughout Italy and in many foreign countries. Since 1980 he has taught music education in public schools, alternating this activity, as a concert artist and conductor, without ever neglecting his artistic commitment to painting.
The events of the last two years:
2017
Participation in "Fabriano Watercolor", international watercolor exhibition (April)
Participation in "Sperlonga in Acquerello" (in the role of Master Exhibitor), international exhibition of Acquerello (April).
Participation in the international event "Watercolor: China meets Europe" Vienna, July.
"The colors of Jazz" Personal exhibition at the Miasino Classic Jazz Festival. July.
Participation in the "International Watercolor Exhibition", Bratislava, August.
Participation in the "International Watercolor Art Festival" event in Lushan (China). August
Participation in the international event "Upcoming show: Reinterpretation 2017" Shangay (China)
Personal exhibition at the Pinacoteca di Guarene CN (October)
Personal exhibition at "Confcommercio" Mondovì (October)