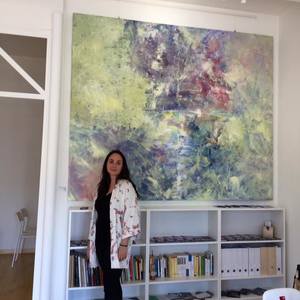 Paloma has a PhD in Theatre Microsociology from Universidad Complutense (Spain), she has completed a Master’s degree in Theatre and Performing Arts from the Madrid Theatre Institute and she possesses a degree in Fine Arts. She is currently completing a degree in Philosophy.
Her work has been exhibited in various temporary exhibitions in Spain, Italy, Argentina and the United States; and it forms part of permanent collections in various museums and contemporary art spaces, as well as private collections. As an artist, she works with different disciplines, which include performance, photography and sculpture. The central theme of her works revolves around interpersonal communication and a deep reflection on art within our society and the artist as a figure. She has belonged to artist groups and platforms which are engaged with different realities such as the recognition of women in art history or the concept of space in the search of artistic creativity within communities.
She works as a consultant and art critic and she writes for various publications which specialise in art such as Culturamas (where she is Chief Editor), or El Duende, to name a few. She is the author of various publications related to culture both professionally and in academia. She conducts lectures on the urban space and on contemporary art within and out of Spain; in addition to seminars and courses at the university, as well as in an informal educational context on culture.
In her commitment to pedagogy, she’s a professor in and out of academia. She teaches various experimental workshops which are related to the performing arts and its benefits and practical application to other disciplines. She possesses a great amount of experience in theatre; in university she was given an award for her first work as a director for an adaptation of Strindberg’s classic work, Miss Julie. She was the founder and worked as the director of the theatre company, Teatro al Punto Producciones and the Vice President of Venezia Teatro, a company dedicated to the reinterpretation of classical texts. She has collaborated with other companies who work in unconventional spaces. She belongs to the network of the Spanish National Drama Centre, La Vía Actor.
Paloma is also a graphic designer, designing corporate branding for various companies. She places emphasis on meticulous and detail oriented work, possessing a clear understanding of the communicative aim of all of her design work as a marketing strategy.
Speaks four languages: English, French, Italian and Spanish. She has completed various translations in these languages for art and cultural texts.
She is passionate about gastronomy and the environment. She is a member of the Italian Slow Food association and has produced documentaries on ethnogastronomy and sustainable development.