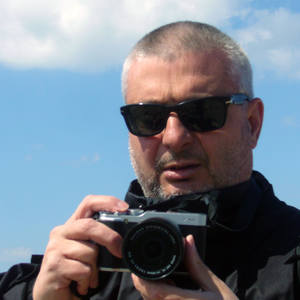 I am a polymorphous artist, if painting is my favorite medium, I also use other media at my disposal: drawing, photography, digital art, sculpture and video where music is present. Each work is approached done by an intellectual and plastic reflection, photos, sketches, notes, the result is a model of the desired plastic image, realized on Photoshop. The execution is mainly done in acrylic or oil. My work is strongly steeped in my Corsican origins, the wild waste dumps, the abandoned villages, the ruins, the invading scrub, the dust of the summer, theses images are strongly printed in my unconscious, but also the exile, the departure and the return, which characterizes us the Corsicans.
My works today are mostly urban landscapes drawn from television, photographic imagery, my travels and Google Maps. I do a research work, a kind of inventory of our human society with my particular vision. My work reflects the noisy and uncertain silence of our time, I question my contemporaries about our paradoxes our choices of life for the future, by submitting images of the past or present imprinted with human presence. These images are most often related to childhood, hopes born in childhood and disillusionment of adulthood.

Santoni Patrick is a Corsican artist born in 1964, working in painting, video and mixed media. He lives and works in France. He studied at the ESBA in Angers (« Higher School of Fine Arts » of Angers, France), from 1983 to 1986 in the architecture section, leading in parallel classical guitar studies.
Santoni Patrick began his painting by Street Art during his studies at the ESBA of Angers. Jean-Michel Basquiat was his first inspirer. Quickly he moved to the studio where he dropped sprays in favor of brushes. His very graphic and protest work, gradually evolved over the years towards an increasingly realistic painting, always anti-establishment, tending towards the advertising imagery, images punctuated by slogans, a smooth painting without matter or little, like the classical painters, the systematic use of the sfumato.
After several professional stages (furniture design, product design, web design), he decided to focus on painting in 2002.
In 2010, he questions his work, and begins a study in small formats based on the landscape with the support of photography, which brings him today to a more pictorial work, with more material.
His landscapes always have this note of protest that characterizes the artist, they reveal an ideological commitment, a societal drift, sometimes underlined by the title, they are often related to the childhood, hopes born in the childhood and disillusionment of the adulthood. His work is not only visual, he raises a question, opens a debate.

His work is now present in numerous private collections in the United States (New York, Miami, Texas, Los Angeles) and in Europe (France, Italy, United Kingdom, Sweden, Norway) and in a public collection in 2004, one of his artworks joins in the collection of the National Taiwan Museum of Fine Arts from Taipei to Taiwan. Santoni Patrick exhibits little today, his work is mainly visible on the internet.

2017 Circle Foundation for the Arts. Top 10 Award presented to: Santoni Patrick for participation in Circle Foundation's Art Competition and distinction within the top 10 contestant artists competing for exhibition at Art Expo New York.

2008 Group exhibition at the Theatre "Le Quai" in Angers (France), "Artists at school".
Five years of working with primary school François Raspail, summarized in an exhibition Intervention
by 15 artists from all backgrounds.
3600 children's artworks are made and exhibited at the Theatre "Le Quai" and some artworks of artists
who assisted the children in their creation.

2004 Group exhibition at the "Taipei Museum of Fine Arts" (Taïwan).
One of my artwork enter in the museum's collection.

2002 International Exhibition Détours'02 in Billière (France). Installation on the theme of travel.
Five paintings 2m x 1m each, representing Graves. The inner journey we do when we are
faced with portraits placed on the graves of people who are unknown to us.

1992 Installing painted decorations on the banks of the Loire, Saint Remy la Varenne (49)
Project management and the seven artists who made ​​up the team "Atelier 92".