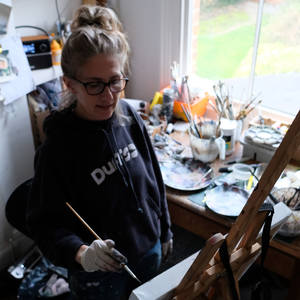 Highly contrasting light and shadows and unusual angles are vital to my composition and add to the sense of being the observer. My paintings are constructed in an intuitive way and bring in a more abstract use of colour and form so as not to place the viewer in an actual setting but more of a feeling of where they might be.
My figurative pieces have been described as 'views from a surveillance camera' and evoke conflicting feelings of detachment and closeness, where the viewer gets to become a spy and has a birds-eye view of the scene below.
Over the last few years, I have been involved in a figurative group of painters called 'Urban contemporaries' as well as an east London artist collective called Creative Bloc. and am often involved in group shows as well as exhibiting as an individual. Over the years, I have worked in many different mediums and still work on abstract works.