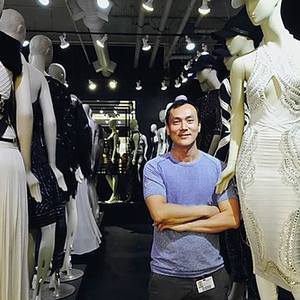 Sean Lim was born in Seoul, South Korea where he studied Visual Communication Design at the Induk Institute of Design. He then moved to New York City to pursue his love of fashion, where he attended the Fashion Institute of Technology (FIT) and immediately began freelancing for several leading clothing brands as a designer. His talent soon became readily apparent and he moved up quickly to the position of Design Director for several prominent fashion companies, most notably with Herve Leger from 2009 to 2018. At HL, he created and developed their runway lines and was responsible for overseeing fourteen New York Fashion Week runway shows. He was instrumental in transforming the image of the classic bandage dress, moving it into a vibrant new era of sexy sophistication, and his fashion creations have been seen on scores of celebrities and featured on the covers of magazines all over the world.

But his love for fabrication and innovation eventually acted as a catalyst to expand his vision to alternative artistic mediums. He transitioned to working as a free-lance fashion consultant, giving him the time to find and explore other paths to satisfy his creative urges and allowing him to use his expertise in construction and design to develop new techniques and ideas for his sculptural art.

Much of the inspiration for his work centers around the use of discarded and re-used materials. His current series of sculptures are all made from recycled corrugated cardboard boxes that are carefully hand-cut, layered to create a stepped effect, and sometimes painted. This allows him to create beautiful ornamental standing objects as well as hanging 3-dimensional reliefs that showcase his attention to detail and his love of texture. By using common materials in unorthodox ways, he hopes to reshape our views of their elemental substance and purpose and aims to convert the mundane into art that not only appeals to the eye, but also encourages awareness of our environmental sustainability.

Graduated from the Induk Institute of Design in Seoul, South Korea - study: Visual Communication Design.
Attended the Fashion Institute of Technology (FIT) in NYC.
Over 25 years in the fashion industry.