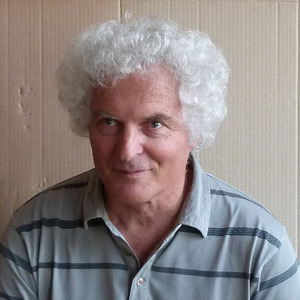 My art is inspired by the Japanese author Haruki Murakami,I'm trying to capture the moments between objects and time,most of my work is based on a bird's-eye view, the viewer is required to create his\her own perception of the subject.

I create my art out of listening to musical patterns, the greater portion of my work is a set called String Quartets, and part of it can be viewed
in the collection here on Saatchi.
Other works include works done out of spiritual states of meditative observance, the perspective is from far away and the figures
are small and colorful
Other part of my work concerns with my recurring dreams: dancing and swimming in the sky, this part is influenced by my work with young children
in the kindergarten, this helps me to reconnect with my own childhood.

During my professional life I dealt intensively with wild animals' behavior and particularly I was interested in mating rituals,
This component comes out in my set of works called Roosters fighting, it is not based on photographs or an attempt to describe it as it is but
rather it wishes to look at it from aesthetic perspective,

The sets called "Breaking Lights" and "Broken View" represents the immense ecstasy of mine while beholding the prism of breaking lights.

A few works of mine deal with the female body, they were not made by careful examination of a certain object but rather an imaginative perspective
of it.

As a Jew born in the holy land I was inspired by the Old Testament bible and the Hebrew stories within it, an example of it can be viewed in the work called
Creation of Man.

Lately, I deal with retrospective observation of the desert and landscapes from my memories, these works appear under "Movements" and "Environments". most of these works are created with a spatula.


The Creation of my art:

The process of creation is a spontaneous affair that starts with applying color to the canvas and playing with it on the canvas, it means
that some of the works are not preconceived - affected by my work with children mentioned above.
painting with oil and not other pigments which dry too quickly suits me for these purposes.


for a complete view of my work you are also welcome to visit:

Interdisciplinary Art which includes: paintings, poems, music, movement, photography and videography. I tried to bring a selection from my work,

THE BLUE FEATHER OF JAY
https://www.youtube.com/watch?v=Af63QP9HJ14

DANCE OF THE OLIVE TREES
https://www.youtube.com/watch?v=-bM_veiVufA

THE TALE OF THE WORM
https://www.youtube.com/watch?v=FtnTDQpIc0g