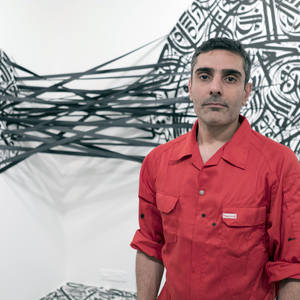 Born in Tehran, 1974, Sasan Nasernia began his career primarily as a calligrapher and typography artist. Exploring different avenues in Persian classical and also modern calligraphy, he has since expanded his practice to include painting, print, digital work and installation. Nasernia, who has a BFA from Azad Art University of Tehran; explores a myriad of themes in his work. He is broadly interested in playing with the tension between opposing elements of order and chaos. Sometimes borrowing from traditional Persian painting and iconography, he immerses them in abstraction and ambiguity. In his more politically driven works he juxtaposed calligraphy with known public personas and modern symbols of violence and conflict to explore the question of today’s political uncertainty and terror throughout the Middle East. Nasernia employs the icons of the past and the modern world, infuses them with letters and lines to create a visual lexicon of his own. He has exhibited his work in multiple group as well as solo shows in Dubai and Tehran. Nasernia currently lives and works in Vancouver, Canada.