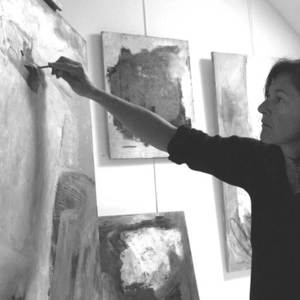 The abstract of Sophie DUMONT is not a concept, it is a step where each fabric is built around a graphics put in prospects by the color. The drawing can recall modelled of a body or the meanders of a landscape. It is only the not premeditated interpretation of a figurative idea, which takes other forms in space. The fabric structure around a set of curves and lines filtering the lights. It is in this purified construction that in scene the pallet of tonalities often enters sharp. But the substance is never rough, drawing from its maturation of the lyric effects which are the result of a fertile work of the matter. The knife works material in successive layers which amalgamate in a combination of colors chatoyantes. The subjacent presence of the various substrates creates this vibration born of contrast between matter and color, to give to the representation a life which is clean for him, independent of any reference. The glance of the spectator, far from being guided, is invited to travel freely in the fabric. Its perception is only the expression of its own emotions, subjected simply to the effect of the modulations transcribed by the artist. From where this permanent relation between works with appearances and the spirit sometimes changing, but which symbolize a coherent and sincere step.