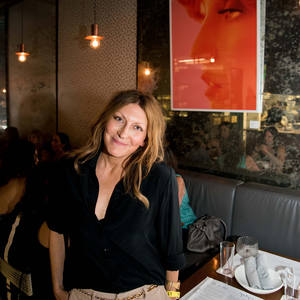 Born in Massachusetts, Stephanie Vovas is a fine art and editorial photographer based in Los Angeles, California. Her favorite thing to do is photograph people. She is obsessed with the culture and style of the 1970s, and is hugely inspired by interior design and architecture. Transformation, glamour, and uncertainty are themes she likes to combine in her work. She has won numerous awards including American Photography 29, 31, 32, 33, 34, Prix de la Photographie Paris, the International Photography Awards, and PDN’s Faces. Her work has been published in The Jealous Curator’s book, Creative Block, Treats!, Playboy, PDN, Domino, Sunset, My Domaine, Styled by Emily Henderson, Acute, Santa Barbara Magazine, Styled at Home, as well as the forthcoming “A Big Important Art Book” by Danielle Krysa. Her photography is held in private and public collections around the world. She has shown her work in numerous solo and group exhibitions. Her work can be seen at: www.stephanievovas.com

10 Emerging Female Artists to Invest In Now Before They Blow Up, mydomaine.com:
https://www.mydomaine.com/up-and-coming-artists-2018--5ae3a11e5d086

Here is a podcast interview with The Jealous Curator:

Or hear it on iTunes: