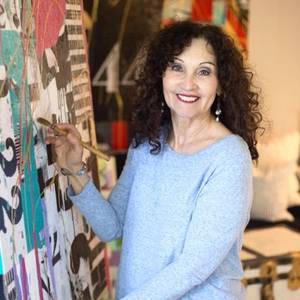 I’m Susan Richardson and perhaps like you, I’ve worn many hats — mother, daughter, sister, grandma, artist, friend, worker, and spiritual seeker. I’ve spent most of my life seeking to reconcile the inner search for a deeper meaning and the desire to find success and recognition in the social world we all live in. On that journey I’ve had highs and lows. Joy and tears. I’ve spent a lifetime making art that tells that story.

I use layers of paint, text, and hand lettering to represent the journey of our lives. I add layers and peel them back to reveal buried ones. It’s bold and strong as well as delicate and ephemeral. That’s life. Amidst all these layers of old and new, inner and outer, we can create a gorgeous harmony. Each of my pieces expresses this interplay of inner and outer, past and present — like a wall that has witnessed wars, parades, graffiti and layers of posters that become tattered and papered over. It all tells the story of a time and a place. I hope that when you see my work, you experience that deep connection that makes you feel the beauty, the magic and the mystery.

Born and raised in New York, currently living in the Bay Area, Susan Richardson creates mixed media works that reflect her changing physical, political, and interior landscapes. She has studied art, calligraphy, and lettering at universities and in workshops throughout the U.S., Italy and Japan. Since 2005, Richardson has exhibited extensively, winning many juried awards. Richardson’s artwork has been published in books and several journals, including juried issues of Letter Arts Review. In 2009, she published a series of three artist's books entitled — What do you think? Books 1, 2, and 3. In 2014, she published a book called Wing Biographies with photos of her three dimensional mobile project called Take these Broken Wings. A poem accompanies each photo of a handmade set of wings. In 2012, her mixed-media piece, I am, received the City of Tracy Purchase Award. In 2017, her piece, On the Ferris Wheel, was awarded Best of Show in the Central Valley Art Association's annual exhibit. She was been commissioned to create two large murals for the city of Tracy.

Susan has been married to her husband, Steve, for over 40 years and they are the parents of two grown children and grandparents of three grandsons. When not making art, Susan loves gardening and has a blooming outdoor garden and a jungle-y indoor garden of houseplants. She is also an avid reader and audiobook listener. She practices yoga and enjoys many kinds of music.