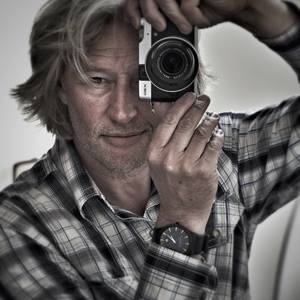 Born 1962 in Karlsruhe, Germany. Lives and works in Karlsruhe.1977: By the first camara (Nikon FM2)1978 1980: Travel to Great Britain1979 - 1983: Formation as a designer(Mentor is the artist Mike Owen)1980- 1985: Travel to Southern France, Katalonien and Andalusien1983: Formation of the company Creativ&Druck1986: Formation of a photostudio. 1987: Formation of the company Artwork Advertising and Communication1988. 1990: Traveling to Asia (China, Hong Kong, Thailand, Indonesien. )1995-1997: Tutor at the Fachhochschule Pforzheim. Since 1996 steering committee of Deutschen Kommunikationsverbandes. 2000: By the first digital SLRSince. 2003 some of photograph projects. 2005: Create an own Fine Art Printing Workflows to make Gicle prints. 2007: Opening first private internet gallery. 2008: Established ArtTransit, Karlsruhe. 2009: Mentor and 2. Chairperson of the association light value e. V. http: // www.lichtwert-ev.de. In 2010: Foundation of the artist's initiative 'extradry'.

Since 2011 Lecturer at the ZAK – Center for Applied Cultural Studies at the University Karlsruhe, Germany.

KULTURZEITRÄUME - SUL takes part in UniKAte 2011!
The project KulturZeitRäume (from 26.5. to 11.6.2011) starts into the second round: After various shop windows and shops in downtown Karlsruhe have become exhibition spaces for painting, sculpture, installation and photography parallel to the art fairs art and UND#6, photography is now in unison taking the helm of Eunique.

Sven Lorenz exhibits motifs from the "Trembling Cubes" series of works in the Baden Landesmuseum's "MUSEUM AM MARKT". Museum at the market, Karl-Friedrich-Straße 6. 76133 Karlsruhe

Modern architecture is increasingly liberating itself from the confines of the uninspired. Courageous ideas and contemporary designs are increasingly contributing to completely reshaping the urban environment or creatively merging it with the permanent. Sul - Sven Lorenz captures this development with his equally inspired photography. Exposes architecture with a further dimension of aesthetics. Whether offices, universities, research centres, high-tech forges, banks, apartment buildings, power stations or private homes - forget the dreary normality, this photography is - OUT OF THE BOX!

UND#6
3 to 13 March 2011 - Nancyhalle Karlsruhe Exhibition in the context of the art fair UND#6 as artist group pART www.part-room.de


TRANSISSION - EXPLORATION OF THE SEDENTARINESS OF THINGS
KUNSTtransit - Karlsruhe, from 25 April 2009 | Photographs from the. work groups OBJECT VIEWS | Architectural Photography


SHADOWLIGHT - the light sensitivity of shadows
KUNSTtransit, May 16 to mid-June 2009 Karlsruhe

The introduction was held by Ms. Nina Rind from ArtRegioTours www.artregiotours.de

Under this title, the makers of KUNSTtransit will present their own works for the second time this year. The eight artists are concerned with the recovery and continuation of that legend whose spirit ultimately defines the attitude to life of a city. Places, niches - perceived and used for a moment - interweave through the temporary presence of the artists and receive the brief significance of an unusual use - art.