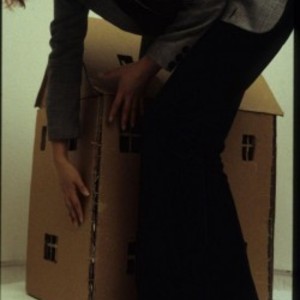 I'm currently creating a stop motion animation 'Heirlooms', which is about a group of children who are haunted by the faceless ghost of Peg Prowler.

The voyeuristic aspect of my work may stem from a childhood wish to gain access to restricted spaces (such as a hidden room in a dollhouse).

My work involves the frustration of being prevented from fulfilling wishes, by only allowing glimpses of these inaccessible worlds. By creating intricate, small worlds I am suggesting the desire to retreat from something threatening like society.

Yet I am also interested in the contradictions and conflict this inspires; it appears that by reducing the world to a small and repetitious environment you create a sense of safety, but perhaps all you are doing is internalising the initial threat.

Images such as rats eating from dining room tables not only evoke feelings of disgust but of childish play. I am perhaps attempting to control fragile memories and perceptions of childhood built on cardboard foundations.

The structures I create are deliberately insecure, unsound, in order to summon up an atmosphere of unease, this is a fragile world that could topple down at any moment. Cardboard is also interesting to work with, as it is often viewed as a 'poor' material, only salvaged by the dispossessed.

The University of Gloucestershire,UK. Diploma in Foundation Studies(Art and Design) 2000-2001.

"In the Confidence of the Night" written by James Scott. Included in the anthology 'Loss' published by Inkermen Press. 2009.

"Face in the Curtains" written by James Scott. Included in the anthology "Lands End" Published by Inkermen Press. 2008.

"Heirlooms" written by James Scott. Included in the anthology "Green and Unpleasant Land" Published by Inkermenpress. 2008.

"Show Your Bones" art work included in the album sleeve by the "Yeah Yeah Yeahs". Copyright by Polydor Ltd(UK). March 2006.