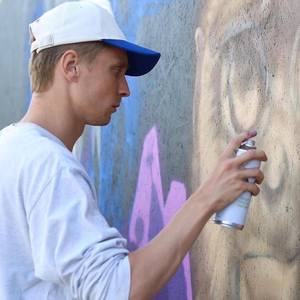 « Do Epic Shit. There will always be: a "Lie" in Believe, An "Over" in Lover, An "End" in Friend, An "Us" in Trust, And An "If" in Life. Less. »
Rinalds Vanadziņš is an award-winning urban painter and graffiti artist who has exhibited nationally. His art reflects his deepest inner emotions and state of mind. Each of Vanadziņš's pieces is imbued with a unique meaning and message from the soul, which he finds difficult to explain using words. A self-taught artist, his unique works are created with acrylics and spray paint. All of his street-art inspired pieces are handpainted using his own methods, he does not employ stencils.
Rinalds born ( 1986 ) in Latvia, Riga. Early childhood focusing on extreme sports - aggressive inline skating, snowboarding, kiteboarding, and active lifestyle, he began to explore life outside the frames of normal people think. In 2003 he started focusing on one of the hip-hop culture elements rap. First recorded songs under the nickname ''RINIS ONE'' and the first local hip-hop battles took him to Latvian rap artist ''DAF''. With whom he recorded the hip-hop album ''Uzzini Vairak'' in 2009, where was featured by several local hip-hop artists and producers. Parallel to all of these activities he engaged in the graffiti scene, cultivating their style and technique become a street and graffiti artist with the name Hawk. Living in one of the districts of Riga, where nothing more could be seen as gray blockhouses, Soviet-era playgrounds courtyards with stray youth groups, I always wanted to make the environment more colorful and interesting, which is also slightly reflected in my works. ''And I want to tell people, graffiti is a form of art and not just a result of random acts of vandalism''. To make money for living playing discotheques in local town bars he began actively paint not only graffiti in streets with spray paint but already using other draw methods, which led to the first paintings and portraits. The act of painting is like a meditation for him and a trip in other dimensions when you can exploring new and exciting styles in a world, it is my freedom flight without any other fictional standards and assumptions. My works reflect the deepest inner emotions and state of mind. I believe each painting has a unique meaning and message from the soul, behind them, which is difficult to explain the words. The first small achievements do not oblige to stop and work to be like a multidisciplinary self-taught artist where I come from Urban/Graffiti art genre..