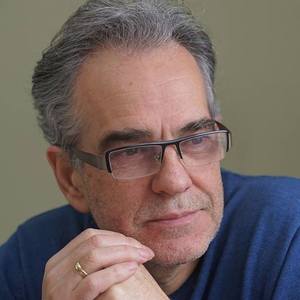 
Painting is a natural expression of his eclectic personality.


With an electrical engineering degree and a diploma in journalism, his early interest in art was a little unusual - he was fascinated by the power of personal computers and their promising application in visual arts. In the 90s he founded the "Bulgarian Society of Computer Art" and participated in various art forums in Bulgaria, Poland, Hungary and Austria. Later he wrote the script for a documentary "Computers and Arts" and was part of a TV series "Electronic House" - both exploring the future of digital arts. In 1990 he attended the prestigious "International festival of computer animation" in Montreal and delivered a keynote speech on the esthetics of computer art.


Considering his early interest in digital arts, his paintings are rather traditional - paint on canvas. As a firm believer that "curiosity feeds the talent" he is not stuck in one style or one theme. He is equally happy to work on a landscape, a portrait, or a composition with lizard-like creatures, combining different techniques. Lately he is experimenting with images from classical paintings by giving them a modern spin, thus building a bridge between cultures in different time.