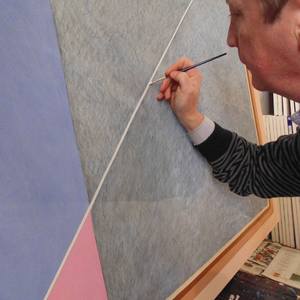 
Born in England.Living in London UK.

Art school and self-taught.Even when i worked
in other jobs i found time to paint and draw.
My work consists mainly of abstract's,portrait's,abstract figuration,landscapes and other subjects.
But definitions,categories,fashions and labels leave me fairly cold,indifferent.My work utilises a variety of mark making,effects,sources and approaches.
These remain my core interests.

1981-82.
One year foundation course in Art and Design. Derby,England

5/2015 to 12/2015.
Paint over fifty paintings all oil on canvas. Subjects consisting mainly of distorted images of Women's heads/faces, manipulated experiments with the
human figure and new cluster abstracts.

05/2015.
Begin working on oil paintings, each 16" x 12",based on photographic,internet and improvised sources/ studies and from drawings made in 2013 - 14.These studies are of distorted, manipulated and warped images of women's head's and figures related to cubist/surrealist ideas of space.

1999.
Make a number of paintings based on improvised and appropriated sources.Each 72" x 66",acrylic/mixed media on canvas.

1985.
Stayed in Berlin for a few months.Saw underground art shows and clubs.

Lives and works in London.