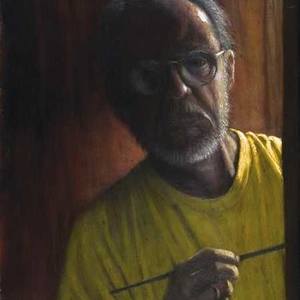 "I was a loner as a kid, an only child, the kind that grow up to be terrorists, bank robbers or artists. I wasn't interested in terror but tried robbery, stole a watch in the third grade but got caught and took up art. They haven't caught me at that yet." (Warren Criswell) ---


Warren Criswell was born in West Palm Beach, Florida in 1936 and has lived in Arkansas with his wife Janet since their bus broke down there in 1978. Primarily a self-taught painter, Criswell is also a printmaker, sculptor and animator. He has had 41 solo exhibitions in the United States and one in Taiwan. His work has been included in 77 group exhibitions in New York, Atlanta, Washington DC, Arkansas, Virginia, North Carolina, Germany and Taiwan, and is represented in the permanent collections of many institutions, including: The Arkansas Arts Center; the McKissick Museum of the University of South Carolina; The Morris Museum of Art, Augusta, GA; Historic Arkansas Museum, Little Rock, AR; the University of Arkansas at Little Rock; Capital Arts Center, Taipei, China; the University of Central Arkansas; Hendrix College; the Center for Arts & Science of SE Arkansas; and the Central Arkansas Library System, as well as in private and corporate collections in the United States, Europe and Asia. ---


In 2021 he won the Arksnsas Governor's Award for Individual artist. In 1996 he was awarded a fellowship grant for painting and works on paper by the Mid-America Arts Alliance and the National Endowment for the Arts, and in 2003 an Individual Artist Fellowship Grant for painting and drawing by the Arkansas Arts Council. Warren Criswell is currently represented by M2 Gallery in Little Rock and Saatchi Art.

2000
Wichita Center for the Arts, Wichita, KS: “The Works of Warren Criswell”

For more exhibitions, awards for and publications about Warren Criswell visit www.warrencriswell.com/resume.html.