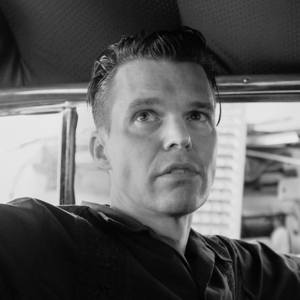 Originally from Kings Mountain, North Carolina, Will Eskridge attended the University of North Carolina School of the Arts, School of Visual Arts/Savannah and earned his B.F.A. in Interdisciplinary Arts from San Francisco Art Institute in 1999. With a father as a veterinarian and an artist mother, Will’s affinity for animals and art began when he was in pre-school. He explores many mediums including film, sculpture and mixed media, but his true love is painting. Eskridge’s work is in both private and public collections in Athens, Atlanta, Raleigh, Nashville, New York, San Francisco, Los Angeles, China, Germany, Italy and Switzerland.

Will has roamed the southeast, setting up shop in Charleston, SC, Kings Mountain, NC and Nashville, TN. He now works as a full-time artist and resides in Athens, GA with his wife, son, and their many dogs and cats. Along with art, Will also drums and plays guitar, volunteers in animal rescue and has an ongoing restoration of his beloved 1953 Buick.