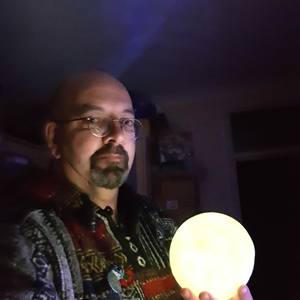 I am a doodle artist with Aspergers Syndrome.
I was born in Cleethorpes, Lincolnshire in 1967. I worked as a plant breeder/laboratory technician for 14 years before a change in career to follow my childhood dream of filmmaking. I have worked as a cinematographer, director of lighting, editor, composer, scriptwriter, special effects technician, producer and director.
Forming MoonCloud Productions in 1999, I made several short films and music videos. 2003 saw me experiment with animation and rotoscoping resulting in two films shown at the Meniscus Film Festival, A Devil’s Heaven (a collaboration with Japanese artist Ankoku Koubou Maki), and the competition entry, Atmosphere. I also made the United Nations music video Crazy World for singer Andrea Meadows in 2004.
Illness saw me withdraw from film production until 2009 when, working for WeKnowMe Productions and Patchwork Pictures, I made 12 music videos and short animated films; Storyboard: Robert A. Heinlein's Starship Troopers, Black Bikini and Black Bava Sabbath are among my more notable works. My last effort for French Composer Josue Pelissier was the short film Origins.
Unfortunately the pressures of production resulted in my having to again withdraw from all film work and put my fragile health first. In the last few years, I have begun to experiment with canvas and digital painting as a means to keep creatively occupied without the stresses or pressures of my chosen career. This work has resulted in The Dreaming Fly series of abstract paintings – which were exhibited in Hull in 2011.

I am an aficionado of world cinema, French and Japanese being particular favorites. All time classics for me are as diverse as Alien, Fargo to Delicatessen and Amelie. I am passionate music listener from prog rock to techno. On any given day I may switch between Spock’s Beard and Infected Mushroom. I also enjoy the classical music of Mozart and Vivaldi and especially enjoy the operas of Verdi, he is a musical genius!
I much enjoy photography and lazy walks alongside water! I derive much enjoyment being besides a river or the sea. I have an eclectic range of interests especially history, from museums to old castles. Astronomy, true crime, conspiracy theories, science fiction, horror, fantasy, art of all types, live music, good coffee or Yorkshire tea, camping, live theatre, are just a few things which appeal to me.