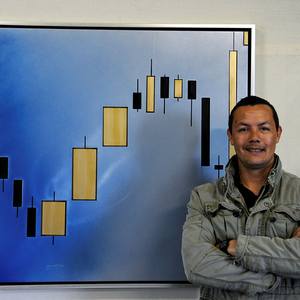 Xan De Vries "my life is like a chart, going up, going down and sometimes very volatile..."

Xan De Vries was born in Woerden (NL) in september 1973 and after that he was adopted by a beautiful family.
As a young boy he was quite rebellic and wild, his first encounter with art was making graffiti on walls and metro's.
Later on he went to the school of merchants and the graphic lyceum, time on both schools didn’t last long because his rebellic and naughty nature resulted in sending away Xan from these schools.
In order to temper himself Xan decided to join the military (Recon Air Assault) for 5 years (1993- 1998).
In these years lots of adventures crossed his path and that was exactly what he needed for that time, the boy became slowly a (young) man.
During military in the spare time he made some paintings because he liked to do that, they were various from airbrush to abstract painting(s) and graffity.
After military he searched for a new encouragement and togheter with a friend they manned the doors at night clubs and disco’s and then they slowly started up a security company.
With 6 years past he left the company and his volatile character led him to the country of Bulgaria where he putted his creativity in the design and development of houses and buildings.
During that time he realised that he had always some fascination for the financial world and especialy the stock exchanges.
Somewhere in that period he opened his first traders account but the years went on and on and he didnt make any single trade because he dint know how to do it.
Later on he met some traders from the Amsterdam stock exchange and this was the moment that he started trading for the first time.
He red about it, followed seminars, did courses, practiced and discussed it with fellow traders.
Many times he had quite good succes on the stockexchange markets but the times he didnt were destructive for his money and equity.
He learned that the most important things to think about trading are “you don’t know anything” / “don’t know to much” / “and secure your trade and getting out in time” / "ensure your stopp loss(es)".
Due to the failures in trading he still kept loving it and watched the charts like a driven addict day by day.
Here became the development for the fascination of the charts and the candlesticks.
Trying to read them, to predict them, too see patterns and to watch there volatilty as they apear.
Its called the beauty of candlesticks and charts…
On a moment his mind told him to combinate these two big passions togheter in one and they are now resulting in a mix of beautiful artworks of charts and candlestickpatterns.
On the site you can enjoy all my works, have fun!

My favourite quote "Hero or Zero"