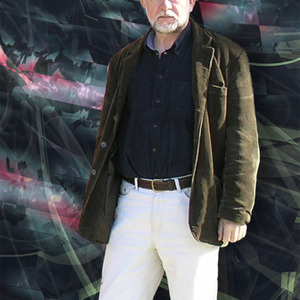 Borne 1947 in Germany. Lived and worked in England since 1975. This work represents a paradigm shift from traditional painting into a dimension which is controlled by the physics of light within a virtual space. The "brush marks" are controlled by waveforms such as sine waves, saw waves etc. at different octaves and frequencies. The resulting image is dependent on the position within the virtual sphere which is virtually infinite and dependent on the artists manipulation of waveforms and choice.Experimenting with "electronic field painting", which are images captured in large format from mathematically generated volumetric textures. The composition takes place within a three-dimensional virtual sphere. Unlike conventional brush strokes the marks are mathematically generated and composed. They are not random, but controlled in the same way as paint on canvas is controlled.