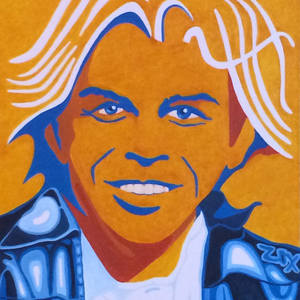 ZOX
POPUP, an art documentary has been selected to be in the 2121 Los Angeles Motion Picture Festival. The film features the art of Zox and includes most of his works available on Saatchi Art.

The Doors’ Jim Morrison lay on his back rapt, never saying a word or blinking, as Zox told the tale of Parisian artists and poets hanging in La Clossier de Lila’s, a 1920 Left Bank cafe. It was there Andre Breton coined “Surrealism” and started a literary movement with his manifesto. He met with Freud, Hemingway, James Joyce and Dali. The ideas they exchanged changed the world. Shortly after, Jim's girlfriend Pamela told Zox he’d have to move out of their Topanga home, where he was living. They were selling and moving to Paris. Zox doesn’t claim he had anything to do with Jim and Pamela’s move, but the coincidence is uncannily epic!

At one point, three huge different billboards Zox designed were simultaneously looming over Sunset Strip. Waiting out front of The Troubadour for the Dr. John show, John Lennon and Elton John slipped inside a white stretch limo by the curb. “John Lennon. Quack quack,” Zox impulsively joked. John popped up through the sunroof and retorted, “Quack quack,” then slid back down. Currently putting the final touches on Pop Up, an art documentary film in association with Cre8 films that follows Zox series of art pop up shows staged from the Pacific to the Atlantic and back. In addition to the film there's a tv series and a book in development that revolves around other works. Zox latest LA Exhibition “Beauty,” is a display of (14) oil canvas collection of pieces showcasing historic women and mythical goddesses. Other current projects include art directing for the company Brandelux a multi-platform for artists involving creating logos, product designs & video packaging. As the CEO of Brandelux international acclaimed music/fashion maverick IKILL ORION says working with Zox "has been a joyful ride both unpredictable & unconventional".