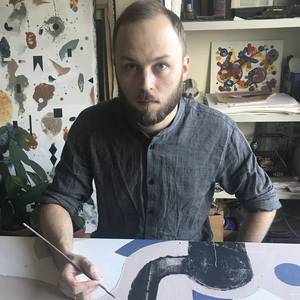 Ivanov Alexey Sergeevich was born on 20th of February 1985 on Sakhalin Island. He graduated from the School of Fine Art in 2001. The winner and laureate Russian and international awards. He was studying Japanese and mastering the various techniques of fine arts, however he was gravitating to graphics. In 2002 he moved to Saint-Petersburg, where he was studying Spatial Design at Institute of Design, Applied Art and Humanitarian Education for six years. While he was doing his degree, he was also exploring history and different painting technics, became interested in ethnography. He researches works of Russian and foreign artists on colour and morphogenesis, drawing analogy with his own vision of abstract. Experimenting with materials opens new possibilities for creating forms to the artist.

In 2018 he was admitted to the Professional Union of artists of Russia.

2002. Two works were selected for the Vladimir Spivakov Fund in Colmar (France)

2018. Four works were selected for the collective project in the Dutch gallery "1340 Gallery" (Amsterdam)