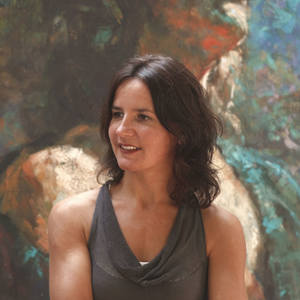 Emelie Jegerings was born in The Netherlands in 1964. She started her creative career in fashion.
After her training at the” Vrije Academie” in her hometown she developed herself in the art of in school art. She became fascinated by the ephemerality: weathered walls with bursts and lost patina. A thorough study of the ancient fresco techniques was her next step. Her further development as a visual artist is remarkable a transition from an in school painter to visual artist which was quite normal in the period round 1900 but nowadays this is very rare.
However this transition has been defining for her present work.
After completion of the “Academie voor Schone Kunsten” in Arendonk ( Belgium) Emelie entirely focused on painting of the human body. Emotion is her guideline, the connecting link in our being. Passion and pathos bring her to the essence she wants to see depicted on the cloth. She depicts her portraits and human figures in vibrant and contrasting colors in ac thrilling active dynamic environment.
Awards and Nominations
First prize Nationale Kunstdagen 2012 in Rotterdam
Third Prize Nationale Kunstdagen 2011 in Amsterdam
Second nomination Regionale Kunstdagen 2013 in Eindhoven
Highest rated artist Regionale Kunstdagen in 2012 in Eindhoven
Highest rated artist Regionale Kunstdagen in 2011 in Rotterdam